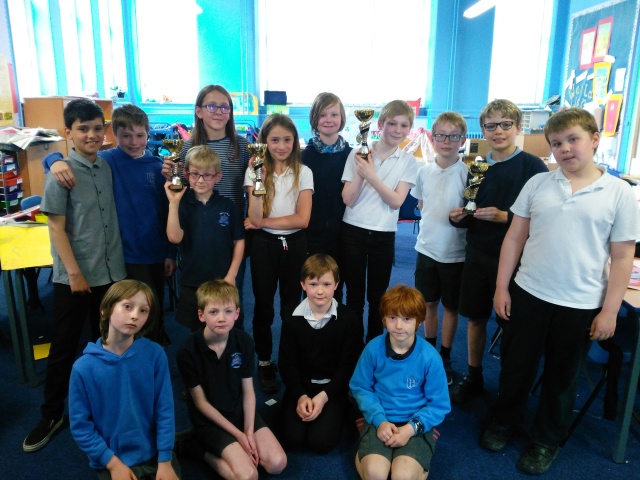 Eight pupils from our Parent Council-run “Fencing is Fun Bruntsfield” after-school club had a great time fencing in last weekend’s 22nd Plastic and Foam Fencing competition for primary school aged fencers from Edinburgh. Each one of them came home with at least one medal or trophy, some with even more

Katharine D. (P7) won the overall competition. Her first place in the highest division was well earned and a successful ending to her personal PaFF series, after coming in second in the 21st PaFF competition in November 2017 and fencing in the top division in previous PaFF events. It was her last PaFF appearance before she moves on to high school in the summer.

Katharine was closely followed by Lachlan C. (P5) who came second in division A. He also won the prestigious Bracewell Trophy for Form and Technique, which is awarded not so much for placing hits and winning fights – which he obviously did too – but for showing great technical skills.

Harold P. (P4) and Bram D. (P3) also fenced in the highest division, placing fourth and fifth. Harold was also chosen for the gold medal for Sportsmanship. It is awarded for being fair and respectful towards one’s opponents no matter whether one is winning or losing.

Our Bruntsfield fencers did really well and earned the trophy for the Best Club & School. It will be on display in the trophies cabinet, next to those from the last eight PaFF competitions. Well done, fencers. You were in great form, showed great fencing skills as well as sportsmanship and team spirit.

This entry was posted in Bruntsfield Primary, Sports News. Bookmark the permalink.